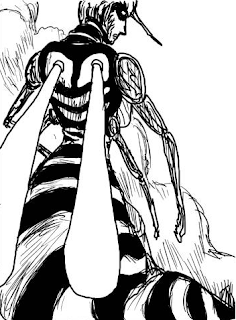 In Short: While Saitama mopes in his apartment, City-Z is attacked by a swarm of mosquitoes led by a mysterious mosquito monster.  Who appears on the scene to save the day?  Not Saitama, actually…

Milestones: First appearance of Genos, who goes on to play Watson to Saitama’s Sherlock for the rest of the series.  This also marks the start of the “House of Evolution” storyline, the first time a story goes on for more than one chapter (even though each web comic chapter ends with “to be continued”, the first four chapters are fairly self-contained).  Saitama’s home is identified as City-Z for the first time, and we get the second mention of the disaster level system.  With Genos’ arrival, we finally see someone besides Saitama battle a monster.

Adaptation Notes: In the Young Jump version Genos wears a shirt with a skull design and the word “genocide” (it’s just blank in the original).  To my mind this suggests that the character’s name is supposed to be a play on the word “genocide”, but I don’t think there’s official confirmation of this.

While Saitama thinks about how each day he just goes home unharmed and washes his gloves, in the original web comic he’s shown defeating a generic monster, while in the Young Jump version this is changed to be two aliens from a flying saucer (or at least, there’s a flying saucer in the background).  So apparently Earth has already been invaded by aliens at least once by this point.  There’ll be more of that later on…
Translation Notes: Saitama wears a shirt with “HAGE” written on it in large, friendly letters.  This is the Japanese word for “bald” (why he wears a shirt like that when he’s so sensitive about his baldness, I have no idea).

The original web comic and Young Jump version both begin with a picture of a cactus with the words “I’ve grown too strong” (俺は強くなりすぎた), which it turns out are Saitama’s thoughts and the start of the inner monologue that makes up the first portion of the chapter.  Oddly, the Viz translation leaves these words out entirely.  Now, many of the title pages for the Young Jump version feature some phrase superimposed over the image, like “attack from the sea!” or other things hyping up the chapter’s contents, and usually these are removed for the Japanese print edition, presumably because they’re extraneous to the story (though why they bother adding them in the first place just to take them out later is something I’ve never understood).  So my guess is that Viz assumed “I’ve grown too strong” was another of those extraneous phrases, even though in this case it’s actual dialogue and was present in the Japanese print edition.

During Saitama’s inner monologue, Viz translates 怪人/kaijin as “superhuman”.  Literally it means “mysterious person” and in practice it typically means “monster” or “villain” (generally, you could say it means a monstrous person, whether literally or metaphorically, in contrast to a monstrous animal).  In this case, Saitama describes fighting against both kaijin and monsters, using the actual English word “monster” (モンスター), so that might be why Viz sought for a different way to translate kaijin than just “monster”, in order to avoid redundant redundancy.  At any rate, the typical Japanese word for a superhuman is 超人/choujin.  Since kaijin is one of the more important words in the series, and also a little tricky to translate depending on the context, it’s something I’ll probably be returning to a lot. 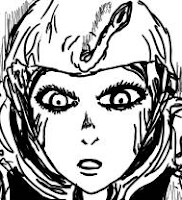 Mosquito Girl: Aptly named monster who controls a massive swarm of mosquitoes by sending out a special signal.  Her mosquito minions look like ordinary mosquitoes, but are actually a new species which even experts can’t identify.  Under her control, they act as a group to suck all the blood from whatever life they come in contact with, including livestock and even humans, effectively mummifying them in the process.  Once they’ve fed, the mosquitoes return and swarm around their master, giving her all the blood they’ve acquired.  The mosquito swarm is so large it resembles a sandstorm; when it approaches City-Z a disaster level of “Demon” is declared, and residents are advised to stay indoors.  Genos theorizes that without Mosquito Girl around to control them, the swarm will safely dissipate (we can probably assume this is true, but it’s never explicitly shown).  Somehow Mosquito Girl can immediately tell when any of her mosquitoes are killed.

Genos: Weirdo who shows up in City-Z to handle the mosquito swarm crisis.  The kind of guy

who will helpfully stand around spouting exposition to nobody in particular.  After killing a few mosquitoes, he quickly works out who their ringleader is and decides killing her will solve the problem.  He sports mechanical arms with some sort of energy cannons in the palms of his hands, and wears a shirt with a skull design and the word “genocide” (overall he seems rather bloodthirsty at this point in the series; he’ll mellow out a bit after spending time with Saitama).

Saitama: Feeling a bit down lately.  While he doesn’t care that his heroic efforts ultimately have no real effect on society, he’s concerned about his dulling emotions.  Battling monsters used to be an emotional rollercoaster, but now he always wins so easily that the experience is empty, like swatting a mosquito.  At this point, he repeatedly fails to swat an actual mosquito that happens by.  Later when he hears about the mosquito swarm approaching the city, he says he should close the windows (would the mosquitoes really be a danger to him? Perhaps they’re his one weakness).

City Z: Named here for the first time.  When the mosquito swarm approaches, a disaster level of “Demon” is declared and residents are advised to stay indoors.  Most residents appear to follow this advice, but one man goes out looting and is promptly killed by the mosquitoes.

Threat Level (aka “Disaster Level”): Mentioned for only the second time, as described above the mosquito swarm ranks as a “Demon” level crisis.  According to the definitions provided in Punch 22, this means that it threatens the “interruption or destruction of an entire town’s functioning”.  This roughly fits with what we see here, where all residents are warned to stay indoors.  I’d assume that counts as “interrupting a town’s functioning”.  Notably, Mosquito Girl herself is never actually said to be a Demon level threat (since the authorities are unaware of her existence), but only the mosquito swarm she controls.