Another translation from OPM: Hero Encyclopedia

Profile
C-Class, Rank 100
Height: 168 cm
Weight: 56.4 kg
Age: 20
Reason for Hero Name: Named after the red scarf he wears in order to distinguish himself as a hero.

A shining star of justice with a fluttering red scarf!!
A waving scarf like a vibrant flame!  He continues stoically training in order to become the #1 star of the hero world!  Bravely challenging giant monsters with his burning sense of justice, he brings light to citizens trembling in darkness!! 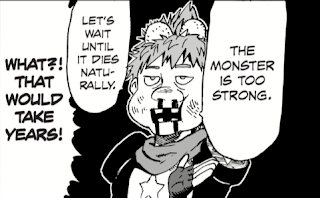 Personality: Even if he does get beaten, he won’t retreat empty-handed!  Spotting his enemy’s weakness, he immediately thinks up a way of defeating them.  This is Red Scarf’s special skill!!
Posted by Herms at 8:41 PM No comments:

Latest pointless project: translating all the entries from the new official OPM guidebook, Hero Encyclopedia. The joke behind these entries is that they're written as if actually from the Hero Association, meaning they try to paint all the heroes in as positive a light as possible, present King as genuinely the strongest man on Earth, and give short shrift to Saitama.  Everyone's ranked from 1 to 10 in a series of somewhat odd stats, including everything from strength to popularity.  I'm going through the entries in the order they're featured in the book (ie Japanese alphabetical order), which might appear a bit random in English.  First up, this guy:

Profile
C-Class, Rank 385
Height: 172 cm
Weight: 74.0 kg
Age: 24
Reason for Hero Name: Named for his unusually red nose.  Apparently his mother made his armor based on it.

A diligent student with a bright red nose!!
A red flower that defeats evil…[pun on how hana in Japanese means both “nose” and flower”]!  The red nose protector his mother made him is his prize possession!  He claims it can even deflect monsters’ attacks!  While he sometimes gets too carried away, we’re still expecting great things from him!

Personality: His trademark pose, with nose and cheeks red, and looking just a tad courageous.  It’s important for heroes to promote themselves in the media too!
Posted by Herms at 10:27 PM 1 comment: