今時の忍者/Imadoki no Ninja
Posted by Herms at 2:43 PM No comments:

Punch 11: “The Secret to Strength”

Milestones: After seven chapters, the House of Evolution story arc wraps up.  For the first time we learn the details of Saitama’s “harsh training”, which is just about the only explanation for his matchless strength we’re going to get for quite some time (not until Chapter 56 of the original webcomic will this thread be picked back up).

Adaptation Notes: When entering “Carnage Mode”, in the original webcomic Carnage Kabuto’s horn becomes crescent moon-shaped, making him look a bit like he has devil horns when seen from head-on.  In the remake, it becomes completely vertical and comes to a single point, like a rhinoceros horn, and in addition he grows a large spike on his back.  Overall Murata’s re-design of his Carnage Mode horn makes him resemble Eva Unit-01 a bit, a resemblance the anime adaptation takes and totally runs with.  Though the transformation seems to make him more muscular even in the original webcomic, the remake makes this much more noticeable (and the anime version plays this up even more, having him become flat-out gigantic). 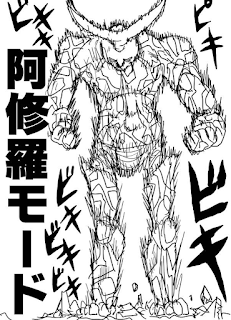 Also, Murata draws “Carnage Mode” Carnage Kabuto with bulging veins on his eyes.  Is that supposed to make him see better or something?

Translation Notes: Originally, Saitama says that during the course of his training he first noticed a change after a year and a half (namely, that he had gone bald but grown stronger).  For some reason, probably just a simple mistake, the Viz manga translation says “one year later” rather than a year and a half.  Viz’s anime subtitles correctly say a year and a half.  No biggie. 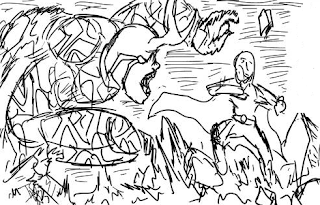 “Carnage Mode” (阿修羅モード) is a fairly straightforward name: “mode” is simply the actual English word for mode (モード/mōdo), while “carnage” is 阿修羅/Ashura, meaning the warlike Asuras of Indian mythology and by extension bloodshed and carnage, as we saw already when discussing Carnage Kabuto’s name.

In Japanese they often use the English word “menu” (メニュー/menyū) to refer to training regimens or courses of training.  So in Japanese, Saitama literally talks about his “training menu”, translated in Viz as “training regimen”.  I guess this is just one of the ways the Japanese use English words in ways that don’t quite line up with their original English meanings.  Unless people actually do use “menu” that way in English and I’ve just never noticed.  I don’t think I’ve ever seen it, but I’m also no fitness expert.

Other Notes: OK, so over in the Dragon Ball franchise you’ve got Cell, a super-powerful bug monster created by a mad scientist.  In episode 157 of Dragon Ball Z, Cell is in the middle of getting knocked around by Vegeta, who’s recently finished his latest training regimen and gotten vastly stronger.  He’s even taken to calling himself “Super Vegeta”, the arrogant jerk.  In the Japanese version of the episode, Cell asks what “Super Vegeta” is supposed to mean (he’s not exactly the sharpest crayon), and Vegeta tells him that explaining would be a pain in the ass.  In FUNimation’s English dub of the episode however…Cell asks Vegeta how he acquired such power, and Vegeta says that “I do a lot of push-ups and sit-ups. And drink plenty of juice”.

Compare this to Carnage Kabuto (a super-powerful bug monster created by a mad scientist) asking Saitama how he acquired such power, and Saitama replying that he did lots of push-ups/sit-ups/squats/running, and ate three square meals a day (including a banana for breakfast).  Coincidence?  Well, actually I think probably yes.  ONE seems to be a DB fan (Murata definitely is), but even if we assume his English is good enough for him to follow along with the English version of the show, there’s no indication that he’s in the habit of doing so.  I suppose it’s possible, but unless we hear from the man himself that this is an intentional reference, I’d just chock it up to coincidence.  Crazier things have happened.  Still, I had to bring it up.

Saitama: Firmly believes that human strength lies in people’s ability to change themselves, so he doesn’t think much of this whole “artificial evolution” business.  His training program to go from average joe to omnipotent in three years: 100 push-ups, 100 sit-ups, 100 squats, plus a 10 km run every day (always eat three meals a day, and don’t use air conditioning).  The key, he says, is to make sure you do this every day, without fail.  Though nobody believes him, he maintains that this is the only training he ever did (still, we see from Punch 39, the bonus chapter “Brushing Up”, and other stories touching on this part of Saitama’s life that he constantly fought monsters during this period, which clearly played a large part in him growing so strong).  After a year and a half of this workout routine, he had gone completely bald and “grown strong” (as strong as he is right now? It’s not clear, though the bonus chapter “Summer” shows Saitama defeating a Demon-level monster in one blow back when he still has a lot of hair left).  Learning that it’s actually Saturday, he immediately becomes distracted with thoughts of how he’s missing out on that supermarket bargain sale, and it takes him a few moments to get around to defeating Carnage Kabuto (only an unemployed person like Saitama could have so much trouble remembering that it’s currently Saturday rather than Friday).

It must be said: while it’s obviously absurd to think that a daily routine of 100 sit-ups/push-ups squats and a 10 km run can make you superhuman, the idea that the key to success is consistent effort over time is actually fairly sound.  There, your Public Service Announcement for the day.

Genos: At first concerned at the thought of the House of Evolution getting his hands on Saitama’s secret, he then becomes quite upset when he thinks Saitama is joking around rather than revealing the secret.  He quiets down when Saitama assures him that he’s telling the truth (but in Punch 17, Genos talks about how even Saitama can’t explain the secret to his strength, so he never truly buys Saitama’s story here). 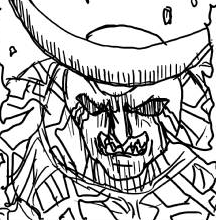 Carnage Kabuto: Assumes Saitama is pulling his leg with all his talk of “100 push-up” and whatnot (can you imagine Carnage Kabuto doing push-ups and squats?).  This makes him so mad he resolves to simply kill Saitama, so he enters “Carnage Mode”, a state where his fighting instincts are enhanced at the expense of his reason.  Once transformed, he will rampage for an entire week, something which has apparently happened before (prior to the transformation, Professor Genus tells him not to do it “again”).  Entering Carnage Mode causes his muscles to bulge and his veins to pop out all over his body, which is frankly a little strange for someone who’s supposed to be a beetle (it’s never explicitly said that this transformation makes him more powerful, just that it increases his fighting instincts, but judging by all the extra muscle mass it’s safe to assume he gets physically stronger).  Though he knocks Saitama around a good deal, none of his attacks do any damage, and in the end Saitama pulverizes his head and a good chunk of his torso with a single uppercut. 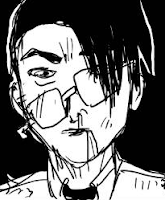 Professor Genus: Had previously assumed that the secret to Saitama’s strength was either surgical manipulation, genetic modification, or some type of drug.  He never doubts that Carnage Kabuto is unstoppable, so seeing Saitama kill him in one blow is a bit of a shock (according to the guide One-Punch Man: Hero Encyclopedia, Carnage Kabuto is a Dragon-level threat, so the number of heroes besides Saitama who could handle him should be fairly limited).  He resolves to abandon his research and change his ways (we see his new lease on life in Chapter 56 of the original webcomic).
Posted by Herms at 12:17 AM No comments: