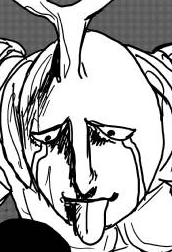 In Short: Genos and Saitama learn more than they’d like to know about Professor Genus, mastermind behind the House of Evolution, and track the madman to his lair.  Or house.  Of evolution.  Which Genos blows up.

Milestones: The debut of Carnage Kabuto, the first this series has had to a “final boss”-type character (to the extent that a final boss even means anything in a series like this).  First time the remake adds in a scene that wasn’t there in the original webcomic, as Kabuto rather brutally murders one of Professor Genus’ clones.

Adaptation Notes: So yeah, in the original webcomic we’re told Carnage Kabuto kills a bunch of Genus’ clones, and we see their dead bodies lying around, but we don’t get to actually see it happen.  The remake changes this by adding in a short scene where a terrified clones opens fire on Carnage Kabuto (presumably in self-defense) and gets punched through the stomach, his ribs and organs splattering on the wall behind him.  It’s probably as gruesome as OPM ever gets.  It’s a nice scene I guess, but I have to wonder…shouldn’t the clone have known in advance that his gun wouldn’t work on Carnage Kabuto?  Since he’s a super genius who presumably helped create Carnage Kabuto in the first place?  The whole idea behind all these clones is that Professor Genus is so smart that nobody else has the brains to help him out, but this clone we see get killed might as well be any old nameless goon, for all the intelligence he shows.  Feels like a slightly wasted opportunity.

Armored Gorilla sends a report back to the House of Evolution about how their “elite forces” have been wiped out.  In the original webcomic, we never see how he sends this report, but the remake adds a delightful bit where his head swings open on a hinge to reveal a tiny satellite dish, which beams the message. 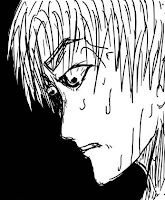 Images added in the remake to help illustrate Professor Genus’ backstory: a framed picture of him on a wall (labelled “I. Genus”, making the source of his name really obvious), a picture of the human evolutionary tree (labeled in German for some reason), a creepy fetus with tubes and wires coming out of it, and a shot inside his lab (featuring a rather old-fashioned looking computer).

As Saitama and Genos run over the mountains and through the woods to the House of Evolution, a background detail (or foreground detail, really) in the remake shows a sign warning about bears, with a knocked-out bear nearby.

The chapter ends with Professor Genus telling Carnage Kabuto about this super-strong person he needs to take as a sample (ie Saitama).  In the original webcomic, the dialogue is simply over a black background.  The remake instead has Professor Genus show security camera footage of Saitama and Genos entering.  Saitama is nonchalantly picking his nose.

Translation Notes: So, “Carnage Kabuto” (阿修羅カブト/Ashura Kabuto).  First off, what’s a “kabuto”, anyway?  Technically it means a helmet, as in old-fashioned samurai armor, but in this case it’s short for kabuto-mushi (literally “helmet bug”), meaning a rhinoceros beetle.  The Japanese seem to have an inordinate fondness for beetles, and references to them tend to pop up in various manga/anime/video games/etc.  So Kabuterimon from Digimon likewise gets his name from kabuto-mushi.  And then there’s the tokusatsu series Juukou B-Fighter (“B” for “Beetle”, of course).  And so on.

The “Carnage” part is slightly more complicated.  In Japanese this is 阿修羅/Ashura, the Japanese word for the Asuras, demons/gods/demigods (take your pick) from Indian mythology.  Their exact nature varies quite a bit depending on the source, but in Japanese they’re generally seen as violent beings, associated with war and bloodshed.  Hence their name became a byword for “carnage”, so that for instance the Japanese term 修羅場/Shura-ba literally means “place of the Asuras” but in practice refers to a battlefield or other scene of carnage (in Japanese 阿修羅/Ashura is sometimes shortened to 修羅/Shura).  So that’s why Viz translates the name as “Carnage Kabuto” (plus, the alliteration makes it catchy).  Elsewhere in manga/anime land, there’s the character Shura from Yu Yu Hakusho, another character named Shura (or Shula) in Dragon Ball episode 81, Asuraman from the Kinnikuman series, who’s not to be confused with Asuramon over in Digimon, etc. 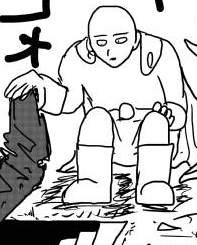 Saitama: Not into dudes.  He’s still impatient when it comes to long backstories, and doesn’t see what any of this “House of Evolution” crap has to do with him.  But he still insists on going to stop them right away, because there’s a big sale at the supermarket tomorrow that he doesn’t want to miss (Saitama is unemployed at this point and so always on the lookout for ways to save money).  It takes him and Genos four hours to run from his house over to the House of Evolution’s location (but he’s probably going slow for Genos’ sake).  He admits that he pretty much never manages to arrive on time at the scene of disasters and whatnot, which is roughly consistent with what we’ve see in Punch 1 and 3.  He flatly dismisses the idea that a human being could fly (but then, he hasn’t met Tornado yet).  He thinks it’s mean of Genos to blow up the entire House of Evolution right off the bat without seeing what kind of traps they might have had prepared first.

Genos: Already falling firmly into the “sidekick” role, he yells to Armored Gorilla that Saitama is busy and so he should shorten his explanation to 20 words or less (precisely the same thing Saitama told him back in Punch 7).  He had heard rumors about the House of Evolution before, but believed they were merely a harmless “cult” and not realized they were involved in creating dangerous monsters (this implies that the House of Evolution may have human followers besides just Professor Genus and his clones, but if so we never see or hear about them).  He’s keen to question Armored Gorilla to try and find any leads on the “mad cyborg” who destroyed his hometown.  Arriving at the House of Evolution, he immediately blows the entire above-ground portion of the building up, believing this to be the most efficient way of dealing with the situation (he’s definitely a “shoot first” sort of guy). 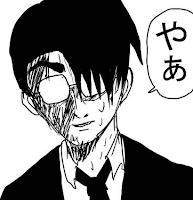 Professor Genus: Genius scientist (hence the name). Tiny bit mad.  Born with phenomenal intellect, as a young child he became disappointed with human imperfections, and regarded those around him as nothing but dumb animals.  When 15, he first hatched a plan to use artificial evolution to create a world more up to his standards.  As a young scientist he used his intellect to make many contributions to the society, but could find no one willingly to support his dream of artificial evolution, making him determined to carry out his plans by himself.  After he turned 70 his research finally started to show results: he regained his youth, created numerous clones of himself, and set up the “House of Evolution”, a laboratory deep in the mountains where he and his clones developed many new species via experimentation on both animals and humans.  The House of Evolution became known among the general population as a cult preaching the coming of a new humanity for a new world.

Now, he wants Saitama’s unusually strong body to further his research…but is a bit freaked out to learn Saitama and Genos have already wiped out his “elite forces” and are on their way to put a stop to him for good.  He prepares numerous traps throughout the House of Evolution’s first eight floors, and is reluctantly prepared to unleash Carnage Kabuto if they fail.  Which they do, almost immediately.  Freeing Carnage Kabuto, he stoically accepts the possibility of being killed by his uncontrollable creation, since he still has plenty of clones left to take his place.

Carnage Kabuto: The House of Evolution’s trump card, half man, half beetle, all attitude.  He regards himself as the pinnacle of the “new humanity” Professor Genus sought to create through artificial evolution, and therefore thinks he deserves to be the one in charge.  Though his physical and mental capabilities are overwhelmingly superior to Professor Genus’ other creations, he is psychologically unstable and impossible to control.  In the past he killed many of Professor Genus’ clones, and was locked away in the House of Evolution’s underground bunker.  Now though, Genus has no choice but to let him free in order to obtain Saitama as a sample, dead or alive.  Once unleashed, Carnage Kabuto kills many clones again, but afterwards settles down long enough to listen to what Professor Genus has to say.

Armored Gorilla: Says that he’s the House of Evolution’s only combat cyborg (the fact that he specifies “combat cyborg” implies that they have other, non-fighting cyborgs, but we never see them).  Has a tiny satellite dish in his head which he uses to report back to Professor Genus.  Seems remarkably fine despite having had all his limbs torn off, and there’s no sign of blood, presumably due to his cyborg nature.  Saitama and Genos just leave him by Saitama’s apartment building, and exactly what happens to him next isn’t made clear here (but see Chapter 56 of the original webcomic).
Posted by Herms at 10:37 PM