In Short: Genos continues to find new and exciting ways to get the tar knocked out of him.  Now, the stage is set for the epic confrontation between Saitama and Carnage Kabuto…just as soon as Carnage Kabuto stops being a huge scaredy cat.

Milestones: The longest chapter so far.  In fact…

Adaptation Notes: This chapter has over twice as many pages as the original webcomic chapter it adapts, yet story-wise there really isn’t new.  As often happens with this remake, the extra pages all come from two-page spreads and extra-big panels.  And as usual, it all looks great. 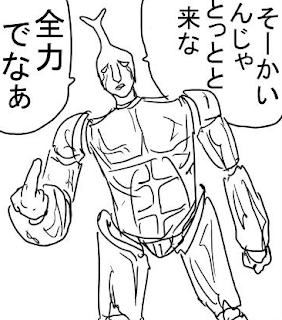 Translation Notes: After Genos uses his “Machinegun Blows” attack against Carnage Kabuto only to get smacked down, there’s a speech balloon with a single word: 不覚/fukaku, meaning “defeat/mistake/blunder/etc”.  Often when translating Japanese into English, single words, phrases, or sentence fragments get expanded out into complete sentences, with the missing information filled in based on context.  Which is where things get interesting here (if you happen to give a monkey about translation minutia). 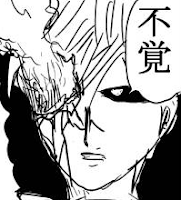 See, in the original webcomic this speech balloon is clearly being spoken by Genos, but in the remake it’s not quite clear.  It looks like it might instead be Carnage Kabuto talking from off panel, and so in the Viz manga it’s translated as “you lose”.  In the anime though (episode 3), Genos is definitely the one who speaks the line, and so in Viz’s anime subtitles it is instead translated as “he got me” (in other words, “I was defeated” rather than “you are defeated”).  Long story short, depending on who is speaking (or who is assumed to be speaking), the same single word can be translated fairly differently.

わかる/wakaru (typically written 分かる) literally means “to understand”, and by extension means “to see” in the metaphorically sense of comprehending something, or being able to tell that something is the case.  The manga translation makes it sound like Carnage Kabuto is just stating how he’s heard Saitama is strong, while in the anime translation it sounds more like he is somehow able to tell Saitama is strong, just by being face-to-face with him.  On that note, I’m not sure why both translations include the “supposed” in “you’re supposed to be strong”, since there’s really nothing like that in the Japanese phrasing.  So I think overall the anime translation is better here.

Saitama: Finds it exciting just walking around a huge underground base.  While he’s reasonably concerned for Genos’ health and safety, seeing how easily Carnage Kabuto beats Genos to an oily pulp makes him excited and eager to fight.  He talks about “getting my hopes up” and not wanting Carnage Kabuto to “disappoint” him, so he seems mostly interested in getting a challenging fight out of this whole “House of Evolution” business, rather than justice or saving the world or anything like that. 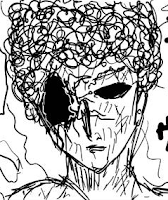 Genos: Refuses to stay down.  He can still detect “life signals”, and deduces that the signals he detects must be clones because they are all the same (so these signals must be fairly detailed and exact).  His latest attack: “Machinegun Blows”, a series of rapid-fire punches.  It does zilch against Carnage Kabuto.  As he gets torn to pieces for the second time in a week, his body seems to be composed entirely of mechanical parts (is his brain the only organic part of him left, Ghost in the Shell-style?).  His hair turns out to have marvelous properties previously undreamed of. 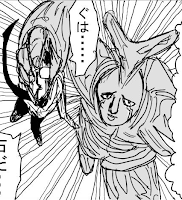 Carnage Kabuto: Clearly dripping with confidence, Saitama can tell right away he’s different than all the other House of Evolution goons.  His immediate response is to try and kill Genos once he learns the guy isn’t necessarily for the professor’s plans.  Not only can he knock Genos around at least as easily as the powered-up Mosquito Girl, but he proves completely impervious both to Genos’ incineration cannon and his Machinegun Blows attack.  The ultimate insult: knocking back one of Genos’ cannon blasts with just his breath.  His fighting instincts are sharp enough to warn him when he’s about to be killed by Saitama, and he retreats accordingly (compare this with Beast King or practically anyone else Saitama fights).  This hint of Saitama’s true power shakes him up, and he demands to know how Saitama got so strong…