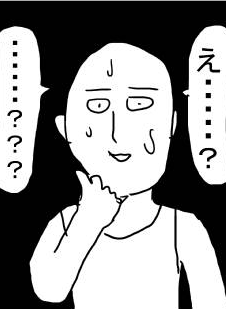 Like Punch 20 and Punch 29, all of the bonus manga side-stories are completely new material, so I’m not going to bother listing them here.  Also, for some reason the chapter numbers up on the Young Jump site right now don’t seem to always match up with the numbers in the Japanese print volumes or the Viz release.  I have no clue why, but I’m sticking with the print/Viz numbers. 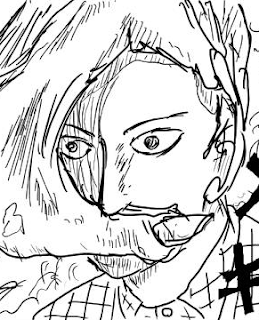 In Short: When underground-dwelling creatures suddenly attack the surface, Saitama faces his greatest challenge yet!  And by “greatest”, I mean “only”.  Anyway, it’s just a dream.  (Spoilers?)

Milestones: First and so far only time we’ve seen modern-day, super-powerful Saitama actually bleed and get hurt, but as mentioned it’s not real.

The Subterranean King and his minions featured here are the first in a triad of such monstrous forces: later on we’ll meet the Sea King and his sea-spawn, then finally Sky King and sons (there’s also Beast King, though he’s created by the House of Evolution and doesn’t lead anything in his own right).

We also get our first look at the outside of Saitama’s home, which differs more than a little between the original and remake.  And on that note…

Adaptation Notes: In Chapter 15 of the original, Saitama complains about how he lives in a “janitor’s room in an abandoned factory” which he modified for his own use, while when that same scene gets adapted for Punch 15, this is changed so that he instead simply says he lives in a “ghost town” (an extremely rare instance of dialogue getting altered between the original and remake).  In keeping with this, whenever we see Saitama’s place of residence in the original, it seems to be some sort of stand-alone room up on the roof of a nondescript large building.  In the remake though, Saitama lives in an ordinary apartment in an abandoned apartment building, which we first see in this chapter.  In fact, the title page for this chapter is a big exterior shot of the place, and if you look closely, you can see that it looks rather rundown.  Punch 20 dives in-depth into the subject of the City-Z ghost town, and is unusual for being an entirely new story added for the remake which is still numbered as a chapter of the main storyline (rather than a side-story, like the other new remake-only material). 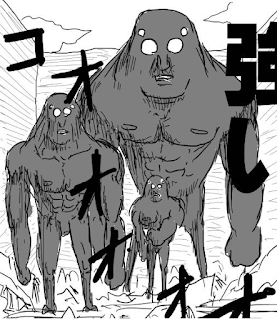 More monster re-designs: in the original, the Subterraneans are mostly featureless, dark-skinned creatures with long arms, comparatively stubby legs, and four small eyes.  Their overall form is the same in the remake, but they now wear elaborate stone masks of diverse designs, stone armbands, necklaces, and other knickknacks.  Meanwhile, the Subterranean King originally had six arms, six eyes, fangs, and horns, while the remake pares him down to four arms and three eyes.  He now carries a sword in each hand (which glow as if made of molten rock), and wears a stone mask similar to his sons…unless that’s his actual face.  His body is segmented like an insect’s exoskeleton, with light pouring out at the joins, so the overall effect is that he’s made up of a core of lava, covered in rock.

The remake repeatedly shows the Subterraneans popping up out of the ground like moles (or daisies).  Back in the original, it’s never directly shown how they come up to the surface, though they do all disappear down a hole once they surrender (exactly like in the remake).  The remake also fleshes things out with more fighting between Saitama and the dream!Subterraneans, including one bit where Saitama drops down and knocks a bunch of them off their feet with a sweeping kick. 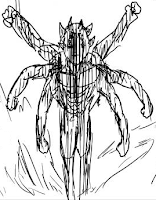 Translation Notes: The Subterraneans introduce themselves as “true Earthlings” (真の地球人/Shin no Chikyuu-jin), the idea being that they consider themselves the planet’s true dominant life-forms, and view us as a bunch of pests infesting the surface.  地球/Chikyuu=Planet Earth (rather than simply earth/dirt/the ground), and 人/jin=people, so Chikyuu-jin in the standard term used in manga, anime, and other examples of Japanese sci-fi for people from this planet, usually in contrast to space aliens.  Viz translates the word ultra-literally, so that the Subterraneans say they are “the true people of the Earth”.  Which wouldn’t be too big a deal, except that it makes it hard to tell if it means “the Earth” or simply “the earth”, so the meaning behind the statement is less clear than it needed to be.

In fact, their entire self-intro (spread out between two panels) goes “We are true Earthlings.  Though apparently you people call us ‘Subterraneans’.”  In Viz the connection between these two sentences is pretty much lost: “We are the true people of the Earth.  You call us ‘Subterraneans’.”  This is all very minor, but it’s the only real problem with the Viz translation as a whole: it’s accurate, but sometimes phrased in too stiff a way, so that the flow of the original dialogue is lost even though the factual meaning is retained.  Again, not a huge problem, and it only sticks out because it’s pretty much their only problem.  Translating humor is always hard, obviously.  Plus, for every instance of wording that I personally find a bit off, there’s at least as many instances where I think they nail it beautifully.  Anyway, Viz’s release of OPM has been nominated for an Eisner Award in the category of Best U.S. Edition of International Material—Asia, so it’s not like they’ve got any reason to listen to my nit-picking.

Oh, and in Japanese the Subterranean King calls the other Subterraneans his “sons” (息子達), while Viz changes this to “children” for whatever reason...maybe because they have no visible genitals? 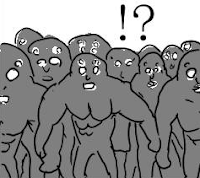 Subterraneans: A sentient species that hails from somewhere below the surface of the Earth, they consider themselves the planet’s true dominant life-form.  “Subterraneans” is simply the name surface-dwelling humans have labelled them with (implying that there’s been prior contact between the two races).  Due to overpopulation, they’re now invading the surface in order to exterminate humans and free up more living space for themselves, a process they regard as a basic struggle for survival (生存競争; ie biological competition).  They’re vastly stronger than humans (they say Saitama is the first one to survive getting hit by them), and their invasion has already wiped out 70% of the human population.  They’re even strong enough to hurt Saitama, and a mighty struggle between the two begins with the fate of the Earth on the line.  Or so it seems…

In fact, Saitama has merely been dreaming about his fierce battle against the Subterraneans.  But upon waking, it turns out that Subterraneans really are invading, just like in his dream.  Except the real ones aren’t remotely as strong as their dream counterparts, and Saitama defeats them as easily as he does everyone else.  Apart from the difference in strength, the real Subterraneans seem exactly the same as the dream ones, and are presumably invading for the same reason.  We can probably assume that in the real world they don’t wipe out 70% of the population, since it’s never mentioned again outside Saitama’s dream.  In particular, Punch 20 follows up on the aftermath of several of the disasters from the early part of the series, with no mention of the Subterraneans’ invasion at all.  Odds are, in the real world Saitama stops the invasion right as it’s getting underway, resulting in relatively little damage (so he’s finally on time for a change).

Subterranean King: The king of the Subterraneans.  Presumably.  In the dream, he appears only after Saitama has defeated all of the regular Subterraneans (apparently about a dozen or so), whom he refers to as his “sons”.  He’s much larger than his sons, has many more arms, and almost looks like he could be from a different species, but apparently that’s just wacky Subterranean biology for you (he might be equivalent to an ant or bee queen, or perhaps Subterraneans go through a butterfly-style metamorphosis when they reach a certain age).  The implication is that he’s much stronger than his sons (who I suppose could be called “Subterranean Princes”, but never are)…sadly though, Saitama’s dream ends just as the two are about to face off.  Even worse, the Subterranean King in the real world dies after just a quick kick to the head, the force of which drives him straight into the ground like a giant golf tee.  Seeing this, the rest of the Subterranean horde meekly retreats.

In Punch 31, the Sky King explains how he saw from up in the sky how the Subterranean King and Sea King were no longer around, which made him think the surface world was therefore his for the taking.  So apparently these kings knew about each other, or at least Sky King did. 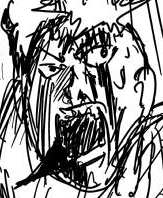 Saitama: In the dream, he’s surprised to encounter opponents strong enough to hurt him, but is genuinely exhilarated to once again be in a high stakes life-or-death struggle.  Though he’s caught off guard at first, he still seems to have the upper hand even against the super-strong dream!Subterraneans, and manages to defeat the whole group of them in the end.  He looks nervous but eager at the prospect of fighting the king, and there’s a great look of confusion crossed with disappointment on his face after he wakes up.  Once he learns there are actual Subterraneans invading, thanks to the dream he’s much more fired up to fight them than he ever was when facing Vaccine Man or Marugori. 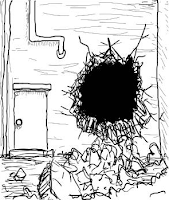 Saitama’s home: As outlined above, between versions it changes from being a crappy janitor’s closet to a slightly-less-crappy apartment in an abandoned apartment complex.  It gets smashed up in the dream.  In the real world, it still contains that piggy bank (as seen in Punch 1), a TV, and bookshelves stocked with a surprisingly large number of books.  What’s he reading?  Well, we see later on in the series that he has an awful lot of manga…
Posted by Herms at 9:02 PM No comments:


Following up the anime cast's comments, here’s my translation of One and Murata’s comments on the upcoming One-Punch Man anime adaptation, as featured on the anime’s official website:

Original Author: One
It’s getting made into an anime!  Saitama’s ugly mug will move and talk on TV.  I’d say they’ve got their work cut out for them.  Even though I’m hardly qualified, they still allowed me to take part in the production committee, and I can tell that the production guys are all chomping at the bits.   I’m definitely looking forward to seeing how it all turns out.  In addition, be sure to keep up with the manga.

Manga: Yusuke Murata
Getting asked to comment on One-Punch Man’s anime adaptation like this really means a lot to me.  On the day the decision went through, I desperately wanted to go on Twitter and shout from the rooftops, but somehow I managed to restrain myself.  It’s blessed with a wonderful staff: every week they’ve had careful meetings, so the content and visuals are both thoroughly worked over.  I’m looking forward to seeing the finished version.  Now that they’ve made the jump to TV, I hope the exploits of Saitama and the gang will entertain a wider audience.
Posted by Herms at 11:11 PM No comments: