The Japanese version can be viewed for free up on the Young Jump website here.

Milestones: It’s the introduction of Saitama, though he’s not named at this point.  Also the debut of the unfortunate City-A, the first of the series’ alphabet cities.  A school child wears a shirt that says “School Child”, a type of joke that’s going to pop up a lot in future.

Adaptation Notes: It’s the first chapter of the remake, and so adapts the first chapter of the original.  Simple enough.  Actually, it’s the second remake of the first chapter.  Murata first knocked up a rough draft as a proof of concept, and this version is still viewable as Extra #1 on the Young Jump site.  It’s a page-for-page, almost panel-for-panel remake of the original (and credits the artwork to “Two”, in keeping with One’s pen name).  In contrast, the actual Young Jump chapter expands the original 15 pages out to 22, mostly thanks to a generous helping of two-page spreads.  There’s no actual changes to the story or dialogue, but we see a bit more of Vaccine Man’s attack on the city…including a shot inside a subway train, which features a sly ad for One’s other Young Jump series, Makai no Ossan.

Vaccine Man’s giant monster form looks almost completely different between the original, the rough draft remake, and the final Young Jump version.  Saitama’s costume is also bulkier and less form-fitting in the rough draft.  The joke with the school child wearing a shirt that says “School Child” was only added for the Young Jump chapter, and wasn’t present in the original or rough draft (but as already noted, similar jokes are present at other points throughout the original).  The school child also looks quite a bit older in the finished Young Jump version.

Translation Notes: Even in the Japanese version, the “School Child” shirt really does say “School Child” in English (other shirt jokes throughout the series typically involve Japanese words written with alphabet letters).  Saitama introduces himself as 趣味でヒーローをやっている者だ.  Now, 趣味/shumi means “hobby” or “pastime”, so you could translate this as “someone whose pastime is being a hero”.  However, hobby/pastime implies something one does on the side, in addition to their day job, but we see later on that Saitama at this stage is unemployed and does nothing other than his hero activities.  Perhaps because of this, the Viz translations opts to word this as “someone who’s a hero for fun”, which sounds a bit odd at first but probably describes Saitama best.

Other Notes: The series’ title and Saitama’s whole appearance is a joke on Anpanman, a long-running Japanese picture book series by Takashi Yanase, adapted into a likewise long-running anime series.  An anpan is a Japanese jam-filled sweet roll, and Anpanman is a superhero with one of these rolls for a head (yes, really) who patrols the city looking for starving people and others in trouble.  Whenever he finds someone in need of food, he offers them his head to eat (I swear I’m not making this up), then gets his creator “Uncle Jam” to bake him another head.  As you might expect of someone with a pastry for a head, Anpanman doesn’t have any hair, and wears a red bodysuit with yellow gloves, boots, and belt, plus a dark red cape.  In other words, Saitama’s appearance matches Anpanman’s pretty closely, except with the red and yellow flipped, and a white cape instead of a dark one.

Since “One-Punch Man” in Japanese is written as ワンパンマン/Wanpanman, the connection’s pretty obvious.  What’s more, the English word “punch” in Japanese is normally written パンチ/panchi, so the fact that One shortened it to “pan” makes it even clearer what he had in mind.  Although on that note, in Punch 28 after Saitama beats Sea King, a bystander declares that he did it in ワンパン/wanpan, “one punch”.  But this is probably just a self-referential joke, since near as I can tell (after 10 whole seconds of Google) Japanese people don’t typically say “wanpan” to mean “one punch”.

In turn, Anpanman’s nemesis is Baikinman, “Germ Man”, a purple alien with antennae, insect wings, and a devil’s tail.  He comes from the Germ Planet and wants to wipe out the human race with germs.  So the joke is that Vaccine Man is the opposite of Baikinman (a vaccine rather than a germ) but he still wants to wipe out humanity, for different reasons.  Though Vaccine Man lacks the tail and wings, he’s got the antennae and so basically looks like a muscular version of Baikinman (but it’s got to be said, the combination of antennae, pointy ears, and beefy build makes him also look an awful lot like Piccolo from Dragon Ball).

Also, the way in which Anpanman has to go to his creator Uncle Jam for new heads is rather similar to how Genos has to go to Professor Kuseno for new parts.  A stretch?  OK, maybe a little… 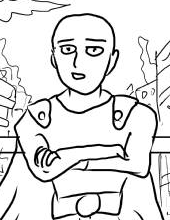 Saitama: As already noted, he’s not named at this point.  In fact, we don’t get any information on him here beyond his standard “hero for fun” self-introduction (even Vaccine Man thinks this is a stupid backstory).  Seeing a TV report on the crisis in City-A, he heads out there immediately to “enforce justice”.  He arrives just in time to rescue a small child from Vaccine Man’s clutches, listens without interest to Vaccine Man’s ranting, then kills the monster with one punch.  Despite the victory, he’s furious that yet another of his fights has ended in just one punch.  Viola!  The basic premise of the series.

In fact, we never see Saitama get this upset over his easy victories again (yelling profanities and all that), so they might still be a relatively new development at this point.  It would make sense for the series to start just as Saitama’s new-found omnipotence is really starting to get on his nerves.  It’s possible that after this he begrudgingly accepts that nobody’s going to be a challenge for him anymore: compare his shouting here to his subdued reaction to Marugori in Punch 3.

In Punch 9, Saitama says that he’s pretty much always late to disasters, which fits with what we see here: he only turns up after Vaccine Man has destroyed much of City-A.  And in Chapter 97 of the original web comic, Saitama says he’s spent the last 2~3 years watching nothing but the weather channel and the “disaster channel” (so odds are that’s what he’s watching when he sees the report on City-A).  Despite Saitama being portrayed as extremely poor later on in the series (with only 20 yen in his bank account in the side story “What Can’t Be Bought”), here his apartment has a rather nice TV and even a laptop.  There’s also a small piggy bank by his TV, probably a reference to the monster from the side-story “200 Yen”. 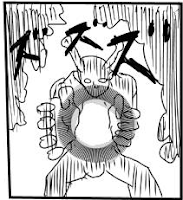 Vaccine Man: The “Earth’s apostle”, a creature created by the “will of the Earth” in order to destroy human civilization.  Or so he says.  According to him, the Earth itself is a living organism, and because they constantly create pollution, human beings are nothing but a virus endangering the Earth’s life.  His purpose then is to wipe out the human “virus” (hence the name “Vaccine Man”), and he makes a start of it by attacking City-A.  He’s shown to fire energy attacks that look quite similar to the kind of stuff you get in Dragon Ball, Yu Yu Hakusho, and countless other series, and he’s even surrounded by a rather Super Saiyan-like aura in one panel.

Though normally human-sized, he can shape-shift: first he transforms his right hand into a huge claw to attack a small child, then he turns into a gigantic tusked monster to fight Saitama.  He’s presumably stronger in his giant monster form, yet he’s still reduced to bloody chunks by just one punch from Saitama.  Personality-wise, he takes his mission to annihilate humanity quite seriously, and is angry that Saitama opposes him simply “for fun”.  He seems to transform into his giant monster form purely out of anger towards Saitama (but it’s possible he also senses Saitama’s strength and beefs up accordingly, like Carnage Kabuto does later on).

Besides being similar to standard issue manga/anime ki attacks, Vaccine Man’s powers are quite similar to Homeless Emperor’s “light power”, as first seen in Chapter 64.  And Homeless Emperor also talks about being given his power to wipe out humanity, who he calls nothing but a foolish plague upon the Earth.  Coincidence?  In fact, if anything Vaccine Man says is true, this should have a big impact upon the rest of the series.  If nothing else, we might expect the Earth to create more Vaccine Men after the first one’s death, but so far this hasn’t happened (maybe Homeless Emperor’s the replacement?)  Perhaps all this talk of the Earth having it out for humanity is why monster attacks are becoming more and more frequent (a recurring theme throughout the series), and maybe it also has something to do with Shibabawa’s grand prophesy that the “Earth’s in danger”.

Punch 39 implies that Saitama’s victory over Vaccine Man is one of the heroic deeds incorrectly attributed to King.

Locations
City-A: A city.  Much of it gets destroyed by Vaccine Man (but presumably not all of it, since there’s no sign of damage by the time it reappears in Punch 30).  As we’ll see, all of the cities throughout the series are simply named after alphabet letters, so appropriately enough City-A is the first example of that.  From Punch 30 onwards, City-A is established as the site of the Hero Association’s main headquarters, but that distinctive black building is nowhere to be seen in this chapter.  Still, if we wanted to we could pretend Vaccine Man specifically targets the city because he’s after the Hero Association (as Sky King does in Punch 31).  Most likely though, the city’s just a magnet for trouble (see Punch 32).

Saitama gets there pretty quickly after seeing the news report on the attack.  It’s later established he lives in City-Z, which you’d naturally think would be pretty far away, but maybe that just shows how fast he is (in Chapters 96, it doesn’t seem to take Saitama very long to simply walk from City-Z to City-A).
Posted by Herms at 7:23 PM