In Short: Saitama’s secret origin story.  A chance encounter leads jaded job-hunter Saitama to save a kid from a big crab monster, motivating him to give up looking for work and train to become a hero instead.  Three years later, Saitama’s bald, omnipotent, and still unsatisfied with his life.

Milestones: It’s our first look back at Saitama’s past, meaning it’s also the first time we get to see him with hair.  Also a rare chance to see him actually getting hurt and being overpowered.  It’s the first and so far only appearance of the cleft-chin kid in the main story, but he pops up occasionally in covers and various other bits of bonus art…and later on he turns out to have a rather influential relative.  Last and probably least, there’s a small reference to the Munage-ya supermarket (more on this shortly).

Adaptation Notes: The remake adds a title page (showing present-day Saitama knocking lumps out of some kind of giant ogre monster), but other than that it’s a page-for-page remake of the original.  The last panel with modern day Saitama shows him holding a shopping bag from Munage-ya, Saitama’s supermarket of choice.  References to this place appear as Easter Eggs throughout the remake, and an official Munage-ya shopping bag is one of the first bits of merchandise available from the anime adaptation’shome page (along with Hero Association mugs).  On the bag the name’s written in hiragana (むなげや), but 胸毛/munage=”chest hair”, and 屋/ya=”shop”, so…”Chest Hair Market”?  There’s probably a joke I’m missing here.

It must be said, salaryman Saitama looks quite a bit more handsome in the remake compared to the original.

Translation Notes: The crab monster in this chapter is named カニランテ/Kani-rante.  Since kani=”crab”, the Viz translation calls him “Crablante”, simple enough.  If rante/lante means anything, I don’t know.  Probably just gibberish, I guess.

To quote Wikipedia, a salaryman is a “man whose income is salary based, particularly those working for corporations. It has gradually become accepted in Anglophone countries as a noun for a Japanese white-collar businessman”.

Picking nits, but in Japanese Crablante says that eating too many crabs caused his “mutation” (突然変異/totsuzen-hen’i) into his current self, while the Viz translation just says he “transformed” rather than mutated.  They might have been shooting for a modicum of scientific plausibility, since “mutation” really isn’t supposed to refer to these kinds of wacky transformations.  Which is to say, feel free to eat as much crab as you want.

Other Notes: At one point Saitama says he can’t let Crablante kill a kid because of the “low birthrate”.  Declining birthrate is in fact a big issue in Japan. 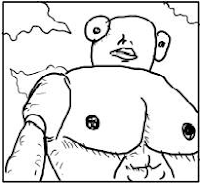 Crablante: Someone who mutated into a half-crab monster after eating too much crab (this sort of thing seems to happen an awful lot in the OPM world).  His upper body is covered in a crablike carapace, and he sports two large crab claws in place of hands, plus two lifeless eyes on stalks.  However, he wears a pair of ordinary briefs, and his hairy legs are perfectly human-looking.  He’s large, but not that much larger than Saitama (maybe 9, 10 feet; it seems to vary from panel to panel).  Apparently he looks just like a villain in an anime Saitama used to watch.  He can’t stand anyone making fun of his appearance, and has sliced up several people so far.  One day while he was sleeping in the park (typical monster behavior?), a kid draws nipples on him with magic marker, causing him to go on the warpath.  He easily knocks Saitama around when Saitama tries to save the kid, but his stalk eyes prove to be his weakness: the moment the monster lets his guard down, Saitama uses his necktie as a lasso to rip out his right eye. Saitama: Still unnamed.  At this point in his life (three years before Punch 1), he’s a would-be salaryman looking for work, and still sports a full head of hair.  He wears a typical business suit, carries a briefcase, and in general looks like a completely different person than the guy we met last chapter.  When he meets Crablante, he’s just failed another job interview and is too dispirited to even bother running from the monster.  Fortunately, Crablante spares him because they both have “lifeless” eyes.  When Saitama happens upon the kid Crablante is hunting, at first he considers leaving the kid to his fate, but then automatically risks his life to save him once Crablante turns up.  Initially even Saitama’s not sure why he does this, but eventually he remembers how as a child he dreamt of becoming a strong hero who could send bad guys flying with a single punch.  Though he doesn’t yet seem to be any stronger than an ordinary man, he manages to defeat Crablante through perseverance and quick thinking.  Following this battle, he spends the next three years training so intensely that he goes bald, obtaining seemingly invincible power in the process.  And yet…

Cleft-Chin Kid: as you might expect, he’s a small child with an absolutely massive cleft chin (we still don’t know his proper name).  He draws nipples on Crablante’s carapace when he spots the monster sleeping in the park, then happily goes on with his day, little realizing that he’s picked the wrong guy to mess with.  Even when the monster shows up looking for revenge, the kid’s still more concerned with his soccer ball than anything else, and only panic once Saitama gets knocked out of the way and seems down for the count.  We don’t see here what happens to the kid after Crablante’s defeat, but in Punch 15 it’s revealed that he later tells his grandfather, the massively wealthy Agoni, about how some passing man saved him from a monster…thus leading to the creation of the Hero Association.   Based on the picture of Agoni in Punch 15, the kid seems to have inherited his big chin from him (and the name “Agoni” is a pun on 顎/ago, Japanese for “chin”).  The fact that he comes from a wealthy family may explain why he’s such a little brat.  Of course, since his actions motivated Saitama to become a hero, he’s probably the most important little brat in the history of the world.
Posted by Herms at 11:00 PM