In Short: Attack on One-Punch Man.  Mad scientist transforms his muscle-head brother into huge, naked giant, who proceeds to smash up a city or two before learning that there’s always a bigger fish.

Milestones: First mention of the threat level system, OPM’s rather eccentric method of gauging the severity of all manner of nasty situations, from meteor collisions to plagues of mosquitoes…though in time it gets reduced to pretty much just a way of ranking monsters by strength.  Here the only level mentioned is “Demon”, and it’s not until Punch 22 that we get a full explanation of the different categories.

Adaptation Notes: The title page shows Saitama putting on his gloves in front of a cityscape being menaced by a Godzilla-style monster (Saitama's face is quite babyish in the Young Jump version, but was changed for the printed release). 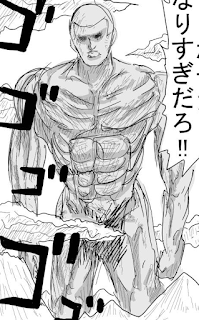 The villainous brothers were never named in the original web comic, but the remake throws in some captions that reveal the older, mad scientist brother to be “Fukegao”, and the younger, beefy brother to be “Marugori”.  Now, it just so happens that 老け顔/fuke-gao means an old-looking face, which seems to describe the scientist brother pretty well.  Meanwhile, I’m guessing “Marugori” comes from contracting まるでゴリラ/marude gorira, “a complete gorilla” (ie “hey, that guy’s so muscular, he’s a real gorilla”).

Besides names, the two brothers also get a bit of a redesign from Murata.  Fukegao gets some lab glasses and long, dark hair rather than his original short, light-colored hair.  Marugori looks pretty much the same in his human form, but his monster form’s jazzed up a bit.  Originally he becomes a giant, but otherwise looks exactly as he did before the transformation.  In the remake through, he becomes much more monstrous, with a bizarre face, big protruding spins, a ridge around his neck, etc.  He actually looks more than a bit like an Evangelion for some reason, but also an awful lot like Younger Toguro’s 100% full power form from Yu Yu Hakusho.  Which might be an intentional reference, considering this guy likewise lets his older (but smaller) brother ride around on his shoulder.

Both character designs for the giant feature a cloud conveniently covering up his crotch, so apparently even the crazy Evangelion/Toguro version still has genitals.

Translation Notes: The “ultimate steroid” which Fukegao creates is named
上腕二頭キング/Jouwan’nitou Kingu, “Biceps King”.  The joke here is that the Japanese word for biceps is 上腕二頭筋 /Jouwan’nitou-kin, with 筋/kin meaning “muscle”.  So for the name of the steroid, they swap out kin/muscle for the English word “king”.

The word for “demon” used in the threat level system is 鬼/Oni.  In Japanese mythology, Oni are demonic, ogre-like creatures who typically carry around big clubs and aren’t terribly nice to people.  Besides “demon” or “devil”, the word’s also often translated into English as “ogre” due to their similarity to Western ogres, but also frequently left untranslated (and check out Oni Press).

The word’s usage throughout OPM has little connection to the traditional folklore Oni, so I don’t have much problem with Viz translating it out to “demon”…but I actually rather wish they’d gone with “Ogre” instead.  The system goes Wolf -> Tiger -> Demon -> Dragon -> God (I told you it was eccentric).  Personally I think “Ogre” seems more fitting for the level below Dragon, since “Demon” sounds more like it should be the one right below God level.  Plus, having two levels in a row both start with “D” makes it a tad confusing.  More confusing than it already is, anyway.  At any rate, they’re both valid, and for sanity reasons I’m sticking with the terminology used in the Viz translation unless I’ve got some really, really good reason not to, so “Demon” it is.

Oh yeah, in this chapter only, Viz phrases it as “Demonic” rather than “Demon”.  They also use “disaster level” here, while later on they typically use “threat level”.  Although “disaster” is definitely a more literal translation of 災害/saigai, the way it’s used in the series, “threat” often works better.  Oh, and it’s just the English word “level” (レベル), so that bit’s easy.

Fukegao: Apparently some sort of mad scientist, he has a lab out in the woods and has just completed work on the so-called ultimate steroid, “Biceps King”, which turns his brother Marugori into a giant monster.  From there he plans on using his genius and Marugori’s brawn to conquer the world and set them both up as kings.  At first he’s dumbstruck to see Marugori wipe out an entire town with just a swing of his arm, but next thing you know he’s gleefully ordering his brother on to take out the next town.  While sitting on Marugori’s gigantic right shoulder, he somehow notices that Saitama is sitting over on the left shoulder (the way this is drawn, it seems completely impossible that he could see Saitama what with his brother’s neck being in the way, but then, he is a genius).  When he orders Marugori to kill the guy on his shoulder, Marugori squashes him by mistake.  Oops.

Overall his plan for world domination seemed a bit vague, frankly.  Was he just going to have Marugori go around smashing cities until the government agreed to hand over the reins of power?  I guess we’ll never know.

Marugori: Fukegao’s younger brother.  He has a muscular build, and wears a black tank top (could he possibly be one of Tank Top Master’s pupils?!)  His dream is to become the strongest man in the world, so he drinks “Biceps King” to obtain the power he seeks.  Apparently strength was his main goal, and he seems uninterested in his brother’s scheme for world domination.  Even so, after becoming a giant he automatically destroys the first town he comes across (killing tens of thousands of people, according to Fukegao), and has no problem moving on to destroy the next.  He blames Saitama for making him accidentally kill his brother, and showers the guy with a barrage of blows that leave a massive crater in the ground.  Despite having (supposedly) achieved his dream of becoming the world’s strongest man, with his brother dead he feels that it’s all pointless.  Saitama sympathizes…then promptly kills him with a massive punch to the face.  Unfortunately, his body crushes another city as it falls…

Punch 20 follows up on the rebuilding of the towns destroyed by Marugori: it’s not going too well, and the entire incident had a big negative impact on the Hero Association’s public image.  Punch 39 shows that King was a bystander during Marugori’s rampage, and that Marugori’s defeat was one of the heroic deeds falsely attributed to him.

Saitama: Shows up late as usual, after Marugori has destroyed a town and killed tens of thousands of people.  His words of reproach to the villain responsible for such an atrocity: “Put on some undies.”  Rather than attacking Marugori immediately, he jokingly asks him how it feels to be the world’s strongest man, then allows Marugori to throw him to the ground and nail him with a barrage of attacks.  None of these attacks hurt him at all, and he looks disappointed and bored throughout the entire process.  He agrees with Marugori that being strongest feels “empty”, and as he casually smashes the monster’s head in, he adds that it’s boring too.  His reaction when Marugori’s collapsing body smashes another city: “Oops”.

Apart from his rather glib attitude in the face of wide-scale death and destruction, the main thing that stands out here is that he reacts to his effortless victory with quiet resignation, rather than getting all shouty about it like back in Punch 1.  It also seems like he lets Marugori attack him, probably just to see whether the guy’s city-smashing attacks will have any effect on him.

City-D: a town relatively close to Fukegao’s laboratory, Marugori reaches it soon after his metamorphosis and destroys it with just a swing of his arm.  Fukegao says “the whole town” is destroyed, but there seems to be enough of it left over for Marugori to smash the rest up while fighting Saitama.  Fukegao also claims that Marugori’s attack kills “tens of thousands” of people (we’ll just have to take his word for it).

Punch 20 reveals that City-D is under the jurisdiction of the A-Class hero Lightning-Bolt Genji, and its reconstruction following this disaster is proceeding slowly.

City-B: a town neighboring City-D.  After destroying City-D, Marugori heads here, resulting in the authorities declaring a threat level of “Demon” and ordering the town evacuated.  Thankfully Saitama intervenes and defeats Marugori…but his huge dead body then falls and crushes City-B anyway.  Hopefully it was already evacuated…?  Well, even though the narration matter-of-factly states that City-B is “destroyed”, it’s a bit hard to believe Marugori’s body was big enough to do the trick, unless it was a pretty small town.

Threat Level (aka “Disaster Level”): Introduced here without much fanfare or explanation, as noted above Marugori’s city-smashing antics result in a threat level “Demon” being declared, which means City-B is to be evacuated.  As outlined in Punch 22, a Demon-Level crisis is one “threatening interruption or destruction of an entire town’s functioning”, which roughly fits what we see here.  Mass evacuations due to monster attacks and other calamities are a recurring feature of the series, and we later learn that there are high-tech shelter domes and even entire cities built for this sort of thing.

Since two towns end up getting destroyed before all is said and done, arguably it should qualify as a Dragon-Level crisis (one “threatening the destruction of multiple towns”), but the Demon classification is made before Marugori's body crushes the second town.  Anyway, more on this some other day.
Posted by Herms at 11:58 PM