Milestones: Genos’ backstory is revealed in agonizing detail, which means it’s also the first time Professor Kuseno is mentioned by name (he won’t put in an actual appearance until Punch 40).  Professor Genus, his clones, and the House of Evolution make their debut, along with several House of Evolution monsters who will all be dead soon anyway.  We get ages for Saitama and Genos (25 and 19, respectively).  Oh, and Mosquito Girl’s name is mentioned for the first, and last, time.

Adaptation Notes: When you remove the title page, there’s a 1:1 ratio between the pages of the remake and the original web comic (both are 15 pages long).  Previous remake chapters have had several more pages than the web comic chapter they adapted, typically due to added bits of fighting and two-page spreads.

In the web comic, once Saitama shoves Frog-Man and Slugrus into the ground, they’re never shown again and are presumably dead.  In the remake though, they reappear next chapter just long enough to be properly killed off by Beast King.

Despite the name, ONE drew Frog-Man looking more like a lizard.  Frankly, he looks a bit like Agumon from Digimon.  Murata makes him look like an actual frog, and puts some clothes on him to boot (as a result, now he looks oddly like Zoro from One Piece).

Murata’s version of Professor Genus is more of a pretty boy than the original.  But both have a strong “Jeffrey Combs in Re-Animator” vibe going on.  Or is that just me?

Translation Notes: Now that Mosquito Girl’s name is finally mentioned, I should explain that in Japanese it’s モスキート娘/Mosukiito Musume, with モスキート/mosukiito being the actual English word “mosquito”, and 娘/musume literally meaning “daughter” but commonly used to refer to young girls in general.  Pretty straightforward.  Also, note that the name is alliterative in Japanese (Mosquito Musume), something lost in translation.

While I’m on names, I might as well go over the other losers who Saitama beats in this chapter.  First is the praying mantis creature Kamakyuri (カマキュリー/Kamakyurii), who’s comically killed off midway through introducing himself.  His name is a play on the Japanese word for praying mantis, カマキリ/kamakiri.

Then there’s Slugrus, whose Japanese name is ナメクジャラス/Namekujarasu, which as you might expect is a play on the Japanese word for slug, ナメクジ/namekuji.  By the way, Planet Namek and the Namekians over in the Dragon Ball franchise are also a pun on this word.  Near as I can tell, the ラス/rasu bit on the end is just gibberish, a way of making the name different than what it’s a pun on.  A bit like the “ra” at the end of “Mothra”.  So Viz adapts this name as “Slugrus”, which makes sense, but it’s weird that they left Kamakyuri completely as-is.  Shouldn’t they have changed it to, like, Mantyuris or something?  Well, whatever. 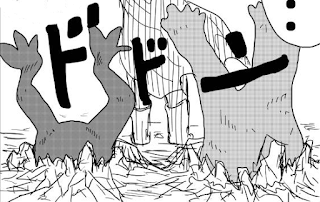 Professor Kuseno (クセーノ博士) is, I believe, a play on癖のある/kuse no aru, meaning “quirky” or “eccentric”.  If I had to guess.

Saitama interrupts Genos’ long story and angrily demands he sum it up in 20文字以内, “20 (Japanese) characters or less”.  The way Japanese works, each written character is at least a syllable, and often a single character represents an entire word.  See Frog-Man above for an example: 男=otoko=man.  Naturally, you get a lot more bang for your buck on a character-by-character basis when compared to English (Japanese tweets can contain a ton of info).  Due to this language/cultural difference, Viz adapts the line as summing things up in “20 words or less”. 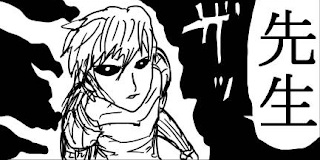 Genos’ term of respect for Saitama is 先生/sensei, which…well, I’m guessing you’ve heard this one before.  Just read about it here.  When Saitama asks Genos to stop calling him that, Genos briefly switches to using 師匠/shishou instead, which Saitama doesn’t like either.  Both terms can potentially be translated as either “teacher” or “master” (it’s “master” in the sense of someone who’s mastered certain skills or knowledge and therefore can teach others, rather than simply a king or boss).  Here, Viz translates sensei as “master” and shishou as “teacher”.  While Genos sticks with sensei, later on Iayan uses shishou to refer to Atomic Samurai.

In Japanese Slugrus uses the personal pronoun オデ/ode to refer to himself.  In English we pretty much only have “I” or “we” for personal pronouns, but Japanese has lots of different ones, each with certain different connotations.  Watashi is the standard one, the one you learn in Japanese 101, while ore is used (mainly) by men and is (somewhat) informal.  Near as I can tell, ode is a derivative of ore.  I gotta admit, I’m not too sure what specific connotations it has, but I remember a big dumb monster in Houshin Engi using it too, so I think the idea may be that Slugrus isn’t too bright.  Maybe?  Darn it, I don’t want to have to actually research stuff!  Anyway, the whole thing goes straight into the “lost in translation” box.

Armored Gorilla talks in a standard “robotic” way, which in Japanese mainly entails using katakana in place of hiragana, and speaking in short, terse sentences.  Hiragana and katakana are the two syllabic systems in Japanese, and for every hiragana character, there’s a corresponding katakana one.  The closest equivalent in English is how we have both upper case and lower case letters.  Day-to-day Japanese consists mainly of a mix of kanji (the ideographic characters) and hiragana, with katakana reserved mainly for foreign-derived words or for emphasis.  So a character who instead speaks in a mix of kanji and katakana stands out.  Katakana characters are also more angular than hiragana, making them extra suitable for a robotic character.  Anyway, Viz represents this by using a special font for Armored Gorilla’s speech.

Finally, in Japanese Saitama mentions that he began training in summer when he was 22.  Viz leaves the “summer” part out. 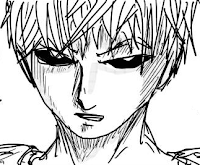 Genos: Four years ago, when he was 15, a rampaging cyborg destroyed his hometown and killed his family.  Genos barely survived, and asked Professor Kuseno to convert him into a cyborg.  Since then, he has travelled from town to town in search of that mad cyborg, defeating countless monsters and “evil organizations” along the way, but so far found no clue as to the cyborg’s whereabouts.  He never imagined that anything besides that cyborg could defeat him, which is why he let down his guard against Mosquito Girl (Genos is going to lose an awful lot from here on out, but I guess he’s quite strong by ordinary standards).  He’s obsessed with being strong enough to defeat the mad cyborg, so after seeing Saitama take down Mosquito Girl in one blow he’s now shown up a week later at Saitama’s apartment, asking to be his pupil.  How he managed to get Saitama’s address is a mystery.

Being a cyborg, any damage he sustains can be repaired as long as the necessary parts are available, which is why he looks good as new despite getting beaten to a pulp last week (presumably Kuseno is the one who repaired him, as he does in Punch 40).  He has some sort of cybernetic sensors that allow him to detect the rapid approach of the House of Evolution monsters (this is probably related to how he verified that there were no “life signals” within 500 meters last chapter).  Armored Gorilla apparently has similar scanners, and can detect a “high level of energy” from Genos, something characteristic of cyborgs.

Saitama: Doesn’t want disciples, and so far finds Genos weird and annoying.  He began training in the summer when he was 22, and is now 25.  Since Genos is young, he believes Genos might well surpass him if he can keep up with his harsh training, but Kamakyuri interrupts before he can explain his training process.  He’s quite upset over having his roof smashed in.  Caught off-guard, he’s pulled down into the ground by something…

In Punch 18 Saitama matter-of-factly explains that since Genos is a cyborg he can’t get stronger through muscle training, but apparently he hasn’t realized that yet.

Professor Kuseno: A “professor for justice” travelling on a journey to stop a rampaging cyborg that had apparently gone mad during the cyberization process.  Four years ago he happened to meet Genos after the mad cyborg attacked Genos’ hometown, and he converted Genos into a cyborg at the boy’s request.  He won’t be seen or even mentioned again until Punch 40, but it’s probably safe to assume he’s the one who always repairs Genos when he gets wrecked.  The connection between him and the mad cyborg is still unknown.  Is he really pursuing that rampaging cyborg out of the kindness of his heart, or is he perhaps the one responsible for it going mad in the first place? 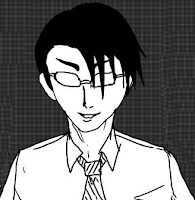 Professor Genus: The mysterious mastermind behind the House of Evolution.  Him and his various clones discuss Mosquito Girl’s defeat, and decide to acquire Saitama as a research sample after watching reconnaissance footage of the battle.  This footage is taken by a small, silly-looking flying tracking camera (suspiciously similar to the sort of thing Doctor Gero uses in Dragon Ball).  Presumably he also uses this tracking camera to locate Saitama’s apartment, but it’s not clear why it took him an entire week to notice Mosquito Girl was defeated.  His research must be really busy. 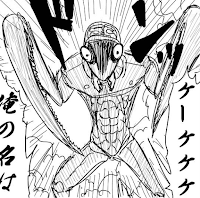 Kamakyuri: A humanoid praying mantis who serves as the vanguard for the House of Evolution’s elite force. “Pretty strong”, according to Frog-Man (but per Punch 8, he probably ranks below Beast King and Armored Gorilla in the House of Evolution’s pecking order).  He crashes through Saitama’s roof but gets his head punched clean off before he can even properly introduce himself

Slugrus: A slug-man with telepathic powers.  While Kamakyuri rushes in to Saitama’s apartment to attack first, he and Frog-Man stay outside, apparently to monitor the situation.  Or maybe they’re just chicken.  His telepathy allows him to immediately tell that Kamakyuri has been killed.  When Genos detects him and Frog-Man outside, Saitama makes short work of them.  Oddly though, Saitama doesn’t kill them (in the remake version), and instead they survive to next chapter, where they become collateral damage to Beast King’s attack.

Frog-Man: Hands out with Slugrus.  That’s about it.  Per Punch 9, he’s part of the House of Evolution’s “elite force” for wiping out the human race, so he presumably must be fairly strong, but he’s defeated far too quickly to tell what sort of skills he has. 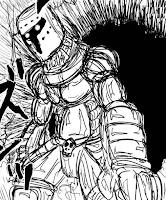 Mosquito Girl: Here we learn that she was a prototype developed by the House of Evolution.  Without sucking blood she’s merely a “weakling” as far as Professor Genus is concerned, but he’s shocked to hear that she was defeated in one blow after absorbing a large quantity of blood.

Armored Gorilla: Cyborg gorilla who appears at the end of the chapter.  More on him later.  He speaks in a stereotypical “robotic” way, and identifies Genos as a cyborg due to the high levels of energy he detects from him.