In Short: Genos struggles mightily to defeat Armored Gorilla, the third strongest warrior in the House of Evolution.  Meanwhile, Saitama gets around to defeating the second strongest, Beast King.  Eventually.  When he feels like it.

Milestones: The first use of named special attacks in the series (suitably enough, Beast King busts out a move with some fancy-pants name, and Saitama counters with just “Consecutive Normal Punches”).  First time we see Genos actually defeat somebody.  Not too many more moments like that down the road (spoilers).  And this chapter closes out the main story of volume 1 of the collected release (but it’s followed by a new side-story, original to Murata’s remake of the series).

Adaptation Notes: While last chapter was no longer than the web comic chapter it adapted, this chapter returns to form with eight additional pages, consisting of expanded fight scenes and two-page spreads.  In this new version, we see Beast King’s Lion Slash technique cut entire houses to ribbons, and even take out his allies Slugrus and Frog-Man as collateral damage.  Speaking of milestones, this marks the first time actual dialogue has been added in the remake: Slugrus recovers from Saitama’s attack (!) and asks Frog-Man if he’s alright.  Then Beast King yells at them to get out of the way, and after his Lion Slash kills them, he says this is simply the Law of the Jungle and that Saitama is next.  This whole little scene was added for the remake.

ONE drew Beast King naked, but Murata decks him out in animal skins and chains across his chest.  He dramatically snaps the chains when he flexes his muscles, in order to show that now he really means business.

The face under Armored Gorilla’s helmet is, well, I assume it’s supposed to look like a gorilla, but ONE drew it like this: 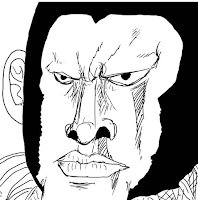 Murata draws it much more like an actual gorilla.

Ground Dragon, meanwhile, looks exactly the same in both versions. 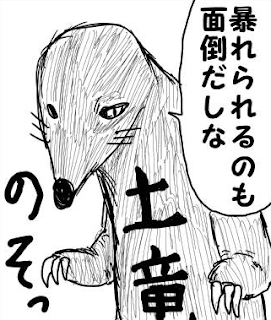 Less straightforward: “Ground Dragon”.  Like with Armored Gorilla, this is the English words “ground” and “dragon” written in Japanese (グランドドラゴン/gurando doragon)
See, the Japanese word for “mole” is mogura, which is more often than not written in hiragana or katakana (もぐら or モグラ), but when written in kanji is 土竜.  These kanji literally mean “ground dragon” (土=ground, 竜=dragon) and would on their own normally be read as (among other things) tsuchi and tatsu, but stick them together and through the magic of Japanese they’re read as mogura and mean “mole”.  For some bloody reason.  Therefore the joke with the character’s name is that it directly translates the kanji for “mole” into English.  Viz explains this very succinctly in a footnote, so I suppose I technically wasted my time writing all that.  Oh well.

In contrast to Armored Gorilla or Ground Dragon, Beast King’s name in Japanese is 獣王/Jū-ō, Japanese for “Beast King” rather than something in English name, for a change (獣=jū=beast, 王=ō=king).  This, by the way, is quite reminiscent of Leomon’s special attack over in Digimon: 獣王拳/Jū-ō-ken, “Fist of the Beast King”. 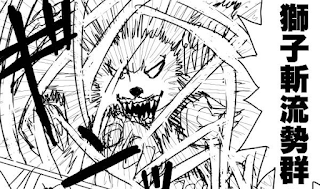 Speaking of special attacks, Beast King’s attack name has a pun in it: 獅子斬流勢群/Shishi-zan Ryūseigun.  The first bit’s simple enough: 獅子/shishi=lion, 斬/zan=cut or slash, therefore “Lion Slash”.  But the next bit’s tricky: 流勢群/ryūseigun is a play on the Japanese word for “meteor shower”, 流星群/ryūseigun (流星/ryūsei on its own is Japanese for a meteor or shooting star).  The joke is that the character for “star” (星/sei) in the middle there has been replaced with the character for military strength or force, 勢/sei.  So they’ve swapped out one character read as sei for another one with a different meaning.  Homophone-based wordplay like this is very common in Japanese.  Viz quite nicely handles this pun by translating the attack as “Lion Slash: Meteor Power Shower”.

Saitama’s attack is as simple as you’d expect: 連続普通のパンチ/Renzoku Futsū no Panchi; with 連続=renzoku=consecutive, 普通の= Futsū no=ordinary/normal, パンチ=panchi=punch (it’s the actual English word “punch”).  So “Consecutive Normal Punches”.  You could alternatively translate it as something like “Rapid-Fire Normal Punches” if you wanted it to sound a bit cooler, but that probably defeats the point.

When Beast King kills Slugrus and Frog-Man, he says弱肉強食/Jaku’niku-Kyōshoku, literally meaning that the strong eat the flesh of the weak.  So basically “survival of the fittest”, or the “Law of the Jungle” (as Viz translates it). 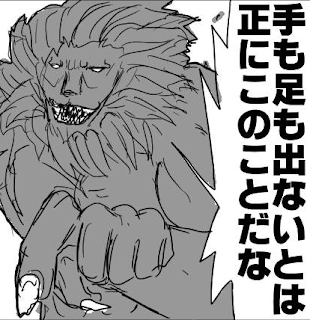 So, 手も足も出ない/te mo ashi mo denai is a stock Japanese phrase for being completely helpless, incapacitated, or at the end of your wits.  Literally it means to be unable to move your hands or feet, but in practice it’s used metaphorically in all sorts of situations where you’re unable to do anything, or simply not sure what to do.  So the joke in this chapter is that Saitama gets sucked into the ground and Beast King declares that this is precisely what the phrase te mo ashi mo denai refers to (手も足も出ないとは正にこのことだな).  In other words, Saitama literally can’t move his hands or feet, so a phrase which is usually used metaphorically in this case happens to literally describe what’s going on.  It’s a bit like if a cat literally grabbed your tongue and someone went “Ha! Talk about ‘cat got your tongue’!”  Anyway, this is all pretty much lost in translation, so Viz just has Beast King say “he can’t move his hands or feet!”

After Beast King gets killed, Ground Dragon runs away saying “あんなの…聞いてない!”  As Viz translates it, this is literally something like “I’ve never heard about that!”  I think though, maybe, that the idea is that Ground Dragon is trying to pretend what he just saw didn’t happen.  Somehow I’ve gotten it into my head that this is a colloquial use for 聞いてない, but I’m having trouble finding any source to back me up, so I may just be crazy. 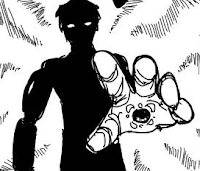 Genos: Seeing the cybernetic Armored Gorilla makes him immediately wonder if there might be some connection to the mad cyborg that destroyed his hometown, and so he has several questions to ask.  Despite the massive difference in their sizes, Genos can block Armored Gorilla’s punch with his own arm.  At first his incinerator cannons are ineffective against Armored Gorilla, but somehow he emerges victorious in the end.  Sadly, we don’t get to see exactly how he wins.  Maybe the anime can fill this bit in? 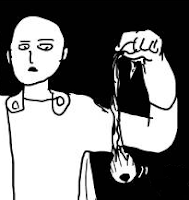 Saitama: Finds being submerged up to his neck in dirt relaxing, but when the time comes he effortlessly climbs out of the ground.  Later, he just as easily digs through the ground to chase after Ground Dragon (see the Monster Association story arc for possible inconsistencies regarding Saitama’s ability to tunnel quickly through the ground, if you want).  His “special” attack: the deadly Consecutive Normal Punches, which turn Beast King into confetti. 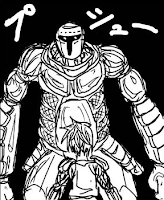 Armored Gorilla: The self-proclaimed third strongest warrior in the House of Evolution.  Normally talks in a stereotypical “robotic” way, but this turns out to just be his way of acting cool.  Though his thick armor seems impervious to Genos’ cannons, in the end Genos manages to remove all four of his limbs, and his helmet to boot.  Nevertheless, he’s confident Beast King will make short of work of Genos…but when it turns out Saitama has already pulverized Beast King, he quickly changes his tune, becoming all cooperative (and dropping the stupid “robot” speech pattern).

Ground Dragon: Pretty much just a talking mole.  With the kanji for “mole” on his chest (土竜, as discussed above).  That’s about it.  He turns out to be the one who pulled Saitama underground at the end of last chapter, which is apparently his preferred method of incapacitating opponents so that he doesn’t have to bother with them fighting back.  If he has any other special abilities, we don’t get to see them (but, like the others, he’s supposedly part of the House of Evolution’s “elite force” for exterminating humanity, as Professor Genus claims in Punch 9).  He makes a run for it after Saitama effortlessly escapes from being submerged and kills Beast King, but to no avail. 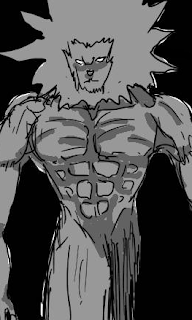 Beast King: Looks so much like Leomon it’s not even funny.  The second strongest warrior in the House of Evolution, according to Armored Gorilla, who also thinks Genos has no chance against him (I guess we can assume this is true, but we’ve only got his word for it).  Deeply pissed off over Saitama’s complete nonchalance in the face of (supposedly) certain death.  He first threatens to poke Saitama’s eyes out, then when Saitama climbs out of the ground he instead unleashes his patented Lion Slash technique, a series of claw slashes that cuts several houses (and a few of his allies) to shreds.  When this proves ineffective against Saitama, he busts out the Lion Slash: Meteor Power Shower (pretty much just more of the same), but his entire upper body is reduced to bloody lumps of flesh by Saitama’s counterattack.  Following his death, Saitama carries around his eye by the stalk.  Ew.

(As we’ll see in some of the bonus content for volume 2, the crows around Saitama apartment mutate after eating Beast King’s remains.)

Slugrus and Frog-Man: For some unknown, possibly unknowable reason, Saitama didn’t bother killing them last chapter, a mistake Beast King is happy to correct.  By the way, ONE has a running joke throughout the character popularity polls he ran in the original web comic, about how Slugrus will turn out to be the series’ final boss.
Posted by Herms at 11:45 PM