Milestones: After five chapters, Saitama’s name is finally revealed.  Genos’ too, but that’s not so big of a deal.  We get the first instance of Genos being caught off-guard, which will soon become his trademark.  Oh, and Genos and Saitama meet.  Did I mention that? 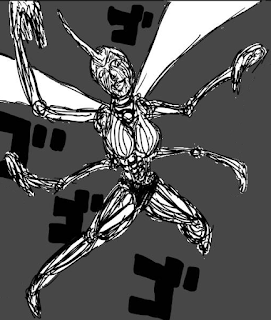 Adaptation Notes: The fighting scenes are more fleshed out than in the original web comic, but other than that this is a pretty straightforward adaptation.  The main difference is probably the design for Mosquito Girl’s powered-up form.  Originally she looks basically the same only more muscular (which is a rather odd look for a mosquito).  In the remake, she ditches the muscle tone and instead gets longer claws, more spikes, bigger mosquito eyes, a sort of tiger-stripe pattern over her body, and…long, flowing hair (always useful in a fight).  In both forms, Murata draws her much cuter than ONE ever did.

This is the first of a string of nine chapters that are not currently available on the Young Jump site.  Punches 1 to 5, and 15 all the way up to 79 can be viewed there for free, but for whatever reason 6-14 aren’t available.  I assume this is intended to encourage people to buy the printed editions, but if so then it’s odd that they don’t take more of the back issues off the site.  Not that I’m complaining.

Translation Notes: Our hero’s name: Saitama.  As it happens, Saitama is one of the 47 prefectures of Japan, the capital city of which is also named Saitama.  And by an astonishing, almost mystical coincidence, ONE happens to be a native of Saitama.  I mean, what are the odds?  While Saitama is the name of a prefecture, a city, and a couple of other random things in Japan, it isn’t really used as a name for people.  So the use of it as the name of the main character here is a bit unusual, like naming a character “Indianapolis”.  Or “Indiana Jones”, for that matter.  It helps establishes that the series is set in a fantasy world.  On that note, “Genos” is also a weird name (and probably comes from “genocide”). 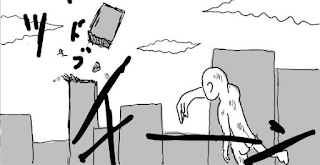 So, Japanese has three separate writing systems.  There’s kanji (the ideographic characters they adopted from Chinese), plus the two phonetic scripts: hiragana and katakana.  Frankly it’s amazing they ever get anything done over there.  When it comes to the place names, “Saitama” is written in Japanese as 埼玉 (for the prefecture) or さいたま (for the capital city).  The former is kanji, the latter is hiragana.  With the kanji spelling, 埼/sai means a (geographical) cape or promontory, while 玉/tama means a jewel or ball.  When it comes to the character’s name though, Saitama is written in katakana: サイタマ.  Most likely this was done to set his name apart from the place names.  At any rate, katakana is typically used in Japanese to write foreign words, foreign names.  By extension made-up fantasy or sci-fi names are typically written in katakana as well, so most One-Punch Man characters have names written in katakana.  Saitama’s just another example of that.

Viz translates this as:

“Mosquitoes are easy to burn, but she sent them against me anyway.”

To my mind, this slightly misses the point.  It’s not simply that mosquitos are easy to burn (though I’m sure they are), it’s that sending all the mosquitoes at him at once turned them into one big easy target.  So leaving the まとめて/”all together” out of the translation changes the meaning.  A bit. 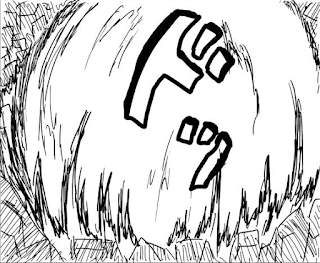 But the main thing that bugs me about Viz’s translation of One-Punch Man overall is that things are often worded in a rather stiff way.  Sometimes this seems intentional, like with Genos.  He typically talks in a formal or polite way, so Viz seems to represent that by having him talk a bit stiff in English, avoiding contractions in typical robot/android/cyborg style.  But in their translations for this chapter even Mosquito Girl, who talks quite casually and girlishly in Japanese, says slightly awkward things like “all the people are hiding, but not the animals in nature” and “I had no more use for them! You idiots!” None of this is terrible, but ONE really excels at snappy dialogue, and I don’t think Viz’s translation does it justice all the time.  In Japanese Genos, Mosquito Girl, and Saitama all have fairly distinct ways of speaking, but in Viz they tend to sound the same much of the time.  Of course, preserving those sorts of nuances is one of the hardest parts of translation.

All that said, “Damn stupid mosquitoes!” is perfect. 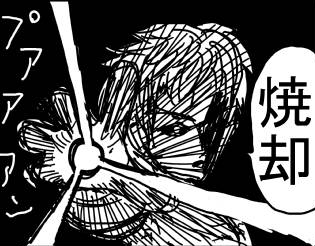 Genos: Describes himself as a “lone cyborg fighting for justice”.  His arm cannons are capable of incinerating everything in a wide radius (we even see a car getting sent flying by the blast), so before taking on Mosquito Girl he confirmed that there were no other “life signals” within a 500-meter radius.  Being a cyborg, he isn’t much phased by having one of his arms torn off, and he can self-destruct as a final measure.  While he figures out that Mosquito Girl uses blood for more than just food, he didn’t expect her to power-up from it, and is caught completely off-guard by her new-and-improved form.  Despite his earlier precautions to ensure the coast was clear before firing his cannon off, after meeting Saitama he immediately forgets the guy is nearby.  This could have had really tragic consequences if Saitama didn’t happen to be invincible (between this and the “getting caught off-guard” thing, Genos seems more than a little careless).  Upon seeing Saitama’s power, he immediately asks to be his pupil.

Mosquito Girl: Her radius of control for her mosquito swarm extends 50 km, and she grows massively stronger by having them inject her with all the “juice” that they’ve collected.  In her initial state she’s fast enough to dodge Genos’ blast and tear off one of his arms, but gets her legs torn off in the process and decides she’s no match for him like that.  After powering up, she’s unscathed by the enormous blast that kills her mosquito swarm, and fast enough to zip behind Genos and attack him before he even realizes what’s going on.  Even her torn-off legs regenerate (which makes sense, considering the House of Evolution created both her and Zombie Man).  She casually knocks lumps out of Genos for a bit with her newfound power, mocking him for being “fragile” and having a punch that couldn’t kill a mosquito.  Thankfully, Saitama’s punches are a little more effective in that regard… 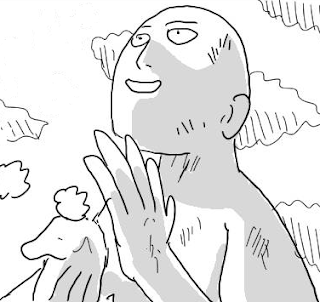 Saitama: Still obsessively chasing after that one mosquito.  When it goes with the rest of the swarm to inject the blood it collected into Mosquito Girl, Saitama follows along and as a result meets Genos.  He’s completely unharmed by Genos’ blast…except that his clothes are all burnt up.  Though the mosquito he was chasing eludes him to the end (presumably it gets killed by Genos’ blast), swatting Mosquito Girl straight through a building seems to satisfy him all the same.  He acts genuinely impressed by Genos’ abilities, but is dumbfounded when Genos wants to be his pupil.  Quite at ease being nude in public.
Posted by Herms at 12:39 AM