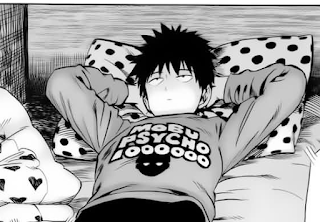 Milestones: So, the first chapter fully original to the Murata remake (but presumably ONE still wrote the story).  It’s the first and so far only extended look at Saitama’s childhood, though we get a glimpse of kid Saitama in Punch 14.  If you’re reading through the printed editions in order, this will be your first encounter with (the person later known as) Mumen Rider.  On the same note, it’s stated that the frequency of monster appearances is increasing, a recurring idea throughout the series, formally explained in the main story in Punch 40.  Saitama wears a shirt with a not-so-subtle reference to ONE's other manga series, Mob Psycho 100, the first of such shout-outs.

Timeline Stuff: This story is set when Saitama is 12, placing it ten years before he begins training to be a hero (at age 22) and thirteen years before the proper start of the series (when he’s 25).  A news broadcast says that it’s been 9 months since a monster last appeared back in July, putting this story in April, which not coincidentally is when the school year begins in Japan.  The broadcast also notes that data from the past ten years shows that monsters are appearing more and more frequently.  We can see that this trend has continued up into the present timeframe of the series, with monsters now appearing on an almost daily basis.

Translation Notes: More a cultural note than a translation note, but 200 yen is worth about 167 US dollars at the current exchange rate.  The exact exchange rate constantly fluctuates of course, but generally speaking one yen is closer in value to a US penny than a US dollar.  Case
in point, the smaller Japanese paper bill is for 100 yen, while 1 yen is a small coin.  The bullies make fun of Saitama for only having such a small amount of cash on him, and at the end when Saitama tells the teacher the bullies stole 200 yen, the teacher assumes Saitama is just screwing around with him.  To someone raised in the US, 200 of a currency automatically sounds like a lot, so there’s a danger of this joke being lost without that bit of context.

Speaking of culture, at the end of the chapter Saitama freaks out when he remembers that he forgot to put out his trash for “burnable trash day”.  In Japan you have to sort your trash into categories, which are collected on different days, similar to recycling being collected on a separate day in the US.  The Viz translation glosses over this and just says “garbage day”.

The name of the latest monster of the week: 怪人・豚の貯金バコン/Kaijin: Buta no Chokin-Bakon.  So, the typical Japanese word for a piggy bank is 豚の貯金箱/buta no chokin-bako.  This breaks down to 豚/buta=pig, 貯金/chokin=saving money, and 箱/bako=box.  The wordplay here is that by sticking on ‘n’ onto the end of bako, it’s morphed into bakon, which sounds kind of like a generic Godzilla/Ultraman Tokusatsu monster name, which have a tendency to just take the name of whatever the monster is based on and stick random extra bits on (and, in the Japanese writing system, using katakana instead of kanji to write the name).  See for instance Mothra, and (from earlier in OPM) Slugrus and Kamakyuri.  As it happens, Bakon looks like it ought to be a play on bacon, what with the pig connection and all, but I’m fairly sure this is just a coincidence: in Japanese, the English word bacon is actually written as ベーコン/bēkon.  Meanwhile, バコン/Bakon happens to be how the Japanese write the name of the Cambodian temple of Bakong.  One learns the darndest things researching monster names…

Oh yeah, the 怪人/kaijin bit at the beginning is just describing the creature as a monster, and isn’t part of the name proper (that’s why it’s separated from the actual name with the ・ mark, equivalent to : in English).  So overall, this name could be adapted into English as something like “monster: Piggy Bankon”.  Which still ends up sounding like a joke on “bacon”.  In Viz it’s simply “monster: Piggy Bank”.
Characters 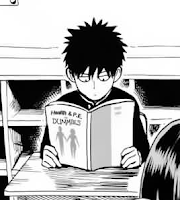 Saitama: A disaffected 12-year old just entering his first year of junior high school.  Spends his time between classes reading books on basic physical fitness (a reference to his future training regime, perhaps?).  When he forgets to do his homework for his third day of class, he doesn’t understand why the teacher makes such a big deal of it, landing him in even more trouble.  Later when heading for an after class meeting with his teacher, he stands up to some bullies who try and extort money from him, even though he can’t fight worth beans, and only has 200 yen (~1.67 USD) on him anyway.  Then when a piggy bank monster suddenly appears and takes his 200 yen instead, he chases after it not only to get his money back, but also perhaps because it “came from outside my everyday, boring life”.  In the end he’s tackled by the monster and loses consciousness for an hour, but still manages to make it back to the school staff room in time for his teacher to chew him out for being a slacker.  Walking back home, he wonders how he can go on in life being so weak.

Flash forward to the present day: Saitama has saved a kid from a monstrous snowman and is telling him the above story from his childhood.  He assures the kid that there is no perfect way to live life; he was scared of society when he was little, and things aren’t much easier today, even though he’s become so strong.  When an even more gigantic snowman monster appears ahead, Saitama is nonchalantly confident he can defeat it, but suddenly freaks out when he realizes he forget to put the trash out for garbage day. 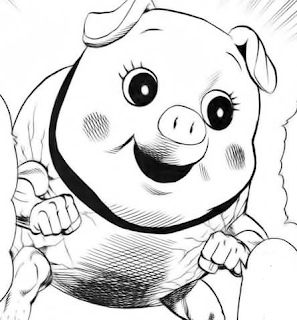 Piggy Bank(on): Monster of unknown origin that appeared in City-Z, nine months after another monster appearance in July of the previous year.  Appropriately enough, it looks like a giant piggy bank (about the size of a small car) with human-like arms and legs sticking out in place of pig feet.  Primary MO: tackling people and demanding they give it their coins.  It first appeared one day shortly after 4 PM and fled after severely injuring several police officers, leading to calls for the government to mobilize Special Forces against it.  The next day it attacked the bullies at Saitama’s school, getting Saitama’s 200 yen in the process, and tackled Saitama in a back alley after he gave chase.  In the end it was surrounded and defeated in a joint maneuver by the police and Special Forces (this makes it sound like a pretty strong monster, although on the flipside none of the humans it attacked ever died, and it’s apparently not fast enough to outrun Saitama).

Scummy Upperclassmen: Two bullies with ripped school uniform who lure lowerclassmen out behind the school and extort money from them.  The black-haired one uses this money so that his little brothers can buy lunches.  Or so he says, anyway. 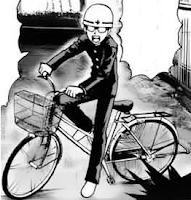 Nameless Student who Commutes by Bike: A nameless student.  Who commutes by bike.  Obviously grows up to be Mumen Rider.  A new student at the same school as Saitama, he has a strong sense of justice and turns up to defeat the scummy upperclassmen, but gets his clock cleaned.  This will be a running theme.  Frankly this whole joke feels a little too "prequel-y" for my taste, but at least Saitama and proto-Mumen Rider don't actually meet or anything.  And it does help solidify the idea that the two of them are really two halves of the same coin, something else that's going to become a running theme.
Posted by Herms at 11:21 PM